For each kid, student, or unemployed you must manually enter the code 50-OFF for the discount to be applied. The tour will verify that the requirements are met.

The Sachsenhausen concentration camp, located 35 km from Berlin, was built in 1936 as one of the tenebrous measures of the Third Reich. It is one of more than fifteen concentration camps both inside and outside German borders. In principle, these places were intended for forced labor. Hence the phrase in the entry "Arbeit macht frei", which was actually originally found in extermination camps, such as Auschwitz, as a result of the Wannsee Laws of 1942.

Being the third camp to be built, after Dachau (Munich) and Buchenwald (central Germany), visiting the Sachsenhausen memorial gives us the opportunity to understand the increasingly violent evolution of these overwhelming places. Once in the town of Oranienburg, accessible from Berlin with the S1 line (with direct connection to Friedrichstr.) and some regional trains (which tend to be less frequent, but somewhat more direct), you can walk about 20 minutes to the memorial and meditate on the journey of the prisoners who arrived by train, first to that train station, and then had to walk a path that today still maintains intact part of its structure.

In an excursion of about 4 hours, we will walk through the streets of Oranienburg, along the "Death March" promenade until we reach the Memorial. Here are some details about the tour.

In the event of cancellation
Up to 24 hours before the event, we will send you a confirmation email regardless of the weather and except for extreme weather conditions that cause mobility impairment, the tour will take place even if it rains or snows. 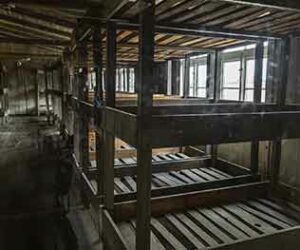